As an Amazon Associate I earn from qualifying purchases. This content is provided ‘as is’. Promo codes, prices or coupons listed are subject to change, expiration or removal without notice at any time. Any price and availability information displayed at the time of purchase will apply to the purchase of this product. HERE. Thank you.

For anyone who loves to shop, a shopping side gig job with a flexible schedule that pays up to $22 per hour, working for Shipt is easy money.

The Shipt company allows their shopper employees the flexibility to control their schedule, which makes being a Shipt shopper a nice side gig job that could be either part time or full time, with total control of when and how many hours you work. Shipt shoppers work as much or as little as they want.

A Shipt shopper makes anywhere between $16 to $22 per hour.

Shipt is a grocery shopping delivery service where a shopper goes to a store to shop for someone. Shipt isn’t limited to just groceries however. As a Shipt shopper you may end up going to Target to get home decor or Office Max for a laptop. However, most Shipt shoppers mostly buy groceries and go to supermarkets, including Costco.

What is a Shipt shopper

When shopping for Shipt, consumers create orders through the Shipt app or website. Shipt then sends the order to a Shipt shopper via text. As a Shipt shopper you get the text and head to the designated store and start shopping. While you’re there you get live texts from the person you’re shopping for with any last minute add-ons or changes. A nice feature for both the shopper and the consumer because no one gets upset that they got the wrong item. Especially useful when something is not in stock and may need to be substituted.

The service is kind of like when your parent or caregiver sent you to the store when you were younger, except that you get paid for it.

The Shipt shopper then delivers the groceries and done. Well, not really. Shipt shoppers are like a little community, where they’ve even created a Shipt Shopper Lingo and rally support for one another. Often, side gig jobs are isolated. It feels like you’re not really part of the company, and you don’t get to know other people that work in the same company. That’s not the case with Shipt though.

Shipt started in 2014 in Birgmingham, Alabama, and were later bought by The Target Corporation in 2017. Today, they are in over 5000 cities around the US. (Click here to see if you can apply in your area).

Who can be a Shipt shopper

A Shipt shopper can be a safer experience than other delivery 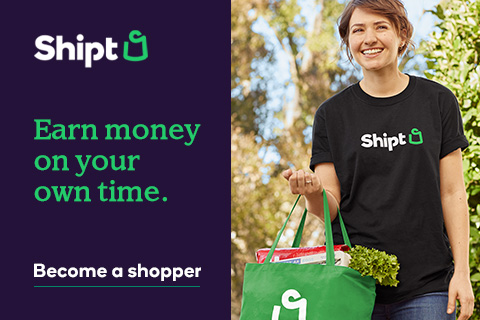 Love to shop? See if Shipt is available in your city and apply to make a little extra money on the side.

Shipt is a great side gig job for college students looking for extra income for example, since Shipt work hours can be set around classes and other school commitments. Its also an easy way to get extra income around the holidays. Its also a good gig for people who are limited to making a maximum income. Some Shipt shoppers work full time as well.

Shipt shoppers also have the benefit of using the Shipt shopping service for free. How to get it: When you go to Shipt website, select “log in“. You will use the same email and password associated with your shopper account. The system will automatically recognize your email and grant you the free membership.

Some graphics made with Canva.

Saving with TaLis is a reader supported site and earns a small commission when you click on affiliate links. Please read my full disclosure HERE. Thank you.

One day after grocery shopping I was unpleasantly surprised at how much money I was spending on groceries. I decided to change this, and set out to find ways to save money. As there are a ton of ways to save money, I successfully brought down my overall expenses.
It was great, I saved money! But then I realized...

END_OF_DOCUMENT_TOKEN_TO_BE_REPLACED

How to & Other Hacks

Ibotta bonus gone bananas
Pay with Ibotta app - how to set up and use.